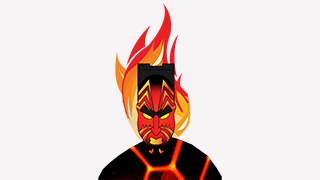 symbolic of earthquakes and volcanoes

Rūaumoko (also known as Rūaimoko) symbolises  earthquakes, volcanoes and seasons. He is the youngest son of Ranginui (the Sky father) and Papatūānuku (the Earth mother) (commonly called Rangi and Papa). He is the unborn child whom he is still in the womb of Papa. When he is kicking, he causes the earth to tremble and shake, the volcanoes to erupt and is also the origin of tā moko.

He is depicted with his korowai showing seismic activity, the subterranean world of molten rock and lava. He also controls the tectonic plates and the fault lines found on earth. Black is his main colour but also with the fire colours of red, orange and yellow, energetic, fast, rigid and intense.